Winding up the Blues .... Almost

This morning was once again rainy. Gracie doesn't mind at all. Here she is just schplopping through puddles and wet grass, more than likely looking for squirrels & bunnies! Notice her wet coat. UGH! 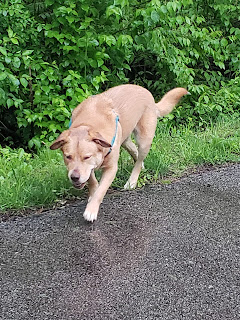 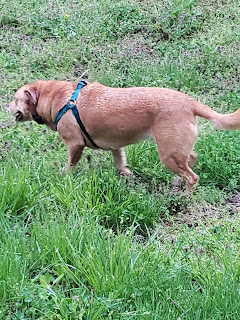 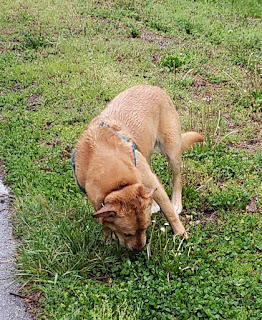 When I got home, I made a note to climb out the 2nd floor window and clear the gutters. Look at the rain pouring over the top BUT did you also notice the first clematis trying to bloom? 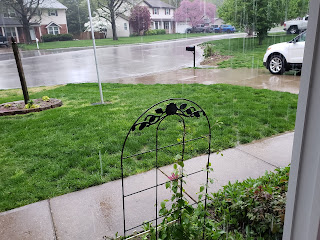 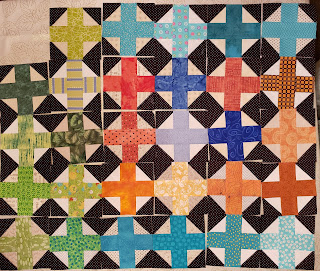 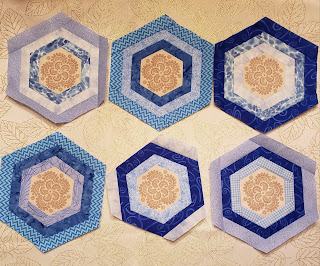 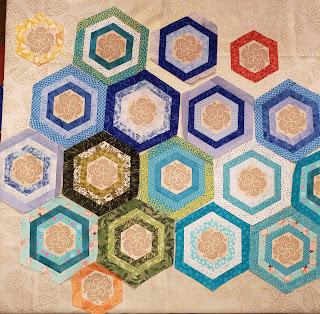 Again, top picture shows the completed-this-month blocks. Heartfire blocks are not difficult but they take a bit of time. I'm really happy that I can sew Awesome Land blocks in between. Here I'm showing you 5 completed blocks plus one almost done. There's another one just about done sitting by my machine so that will be my seven for the month! Yippee! Next picture shows all the hexies completed this year so far. Very short on the orange ones, what can I say? I'm linking up with Angela at So Scrappy to share my blue blocks and check in on my friends' blue projects.

On the Corona front: My neighbor & I have been so excited because we have seen SO MANY bluebirds in our backyards! She actually put up a nesting box and look what happened! Eggs! We're going to have MORE bluebirds in our future! 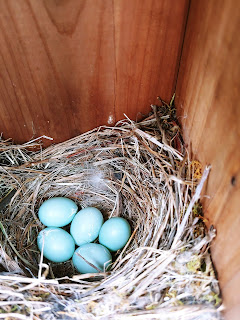 How's the toilet paper supply in your neck of the woods? This is the most TP I've seen since quarantine. Pathetic! I call it "Hotel TP" since each roll is individually wrapped with no information at all, like brand, 1- or 2-ply, soft, scratchy, whatever! If you're interested there's a 4 roll limit! 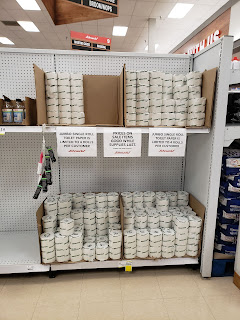 On a positive note, the masks I made for my daughter arrived. She was afraid that VA would make masks mandatory at grocery stores so a special delivery was necessary. Doesn't her hair look great? So touchable and full. Good job, Sare! 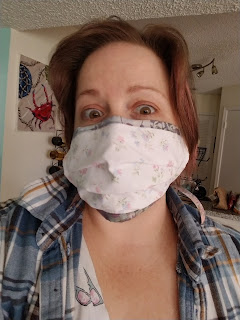 Yesterday on Gracie's walk, we went up and over the bridge to check on the road construction. It's the short cut to our local shopping through the farm fields. This road has been closed for almost two years and it's still a work in progress. I snapped this picture because I thought the farmstead and freshly tilled land looked so pretty!

All the restrictions of this pandemic got you down? Then I suggest you go to your sewing studio/room/space, pull out your very prettiest fabrics, and bury your face in there. It's the only "mask" you need to wear at home for pure delight & distraction. That's what I've been doing lately and it works for me!

Today is Saturday and that means time for all the Super Scrappers to converge with this week's BLUE scrappy projects. Thanks to Angela at SoScrappy for hosting the linky party. Another distraction from the dreaded COVID-19!


So how did I amuse myself yesterday?

Last night was Friday Night Sew In and I decided to pull out my Bloomtopia cross-stitch. I wanted some handwork but something not too fiddly. We went from this 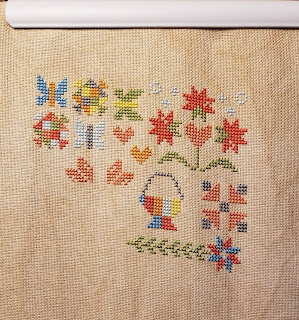 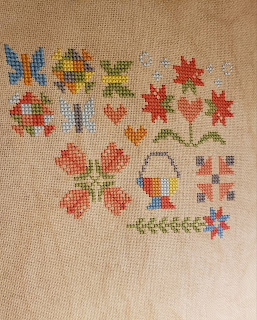 Thank you, Wendy at Sugarlane Designs, for the needed distraction and hosting this linky party. Isn't it just amazing how that little bit of an addition gave me an hour and a half of mind-cleansing nirvana while I watched a new episode of Magnum, PI and chatted with my hubby?

For those of you following DH"s ordeal, his Wednesday hospital release was cancelled and he had two procedures re-done Thursday & Friday. Now we wait and see once more how he's doing and if he'll finally come again. Today is Day #10 of his 2nd admittance. This is not a negative rap on his doctors or the hospital. It's just what it is and his doctor is wonderful! We both have 100% confidence in him.

My DIL sent me this sweet picture of my little Brody last night. He was watching with pure delight his dog "hunt" squirrels. No Corona Virus getting him down!
And this was completed sometime during the week. 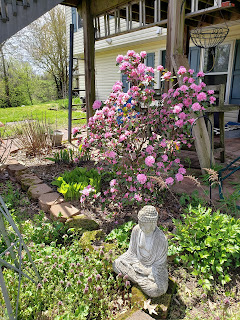 And my Olga azalea began blooming ... along with all the weeds in front of poor Buddha. Gracie & I will have to take care of that. Maybe sometime this week!?!

I hope this post has inspired you to put on your "mask" (the one I spoke of at the top of this post) and put the pandemic in perspective for you. Smile and have a fabulous weekend!
Posted by Susie H at 9:01 AM 14 comments:

I am plugging along as best as possible considering the circumstances. Spending a lot of time lately sending texts & emails and making phone calls to keep family and friends up-to-date on DH. He's had 2 procedures this week that should finally take care of things and we're looking at him being discharged later this afternoon. How do I feel about that? Nervous as he'll be coming with a couple of tubes sticking out of him. I hope the directions for his after-stay care are well written since I can't go in the hospital to get the lowdown from the nurse/doctor and ask questions. So moving right along .... 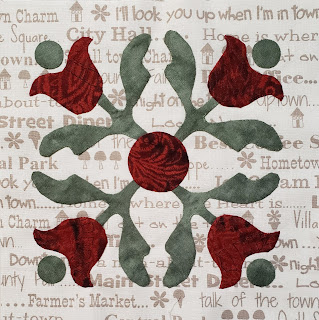 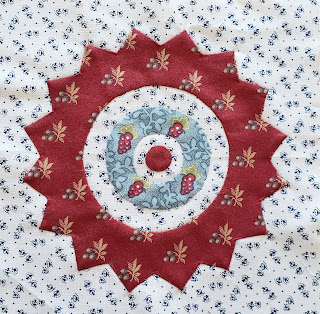 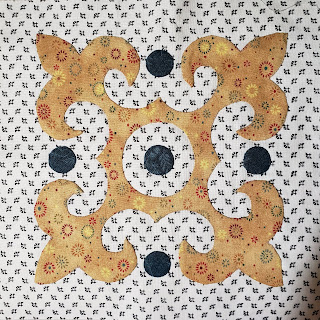 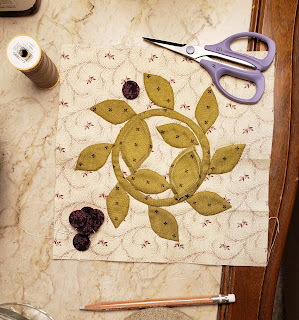 This one is close to done. Only 2 more leaves and 9 berries. The berries are prepped and ready to go. They're small (about dime-sized) so should go on in a jiffy! 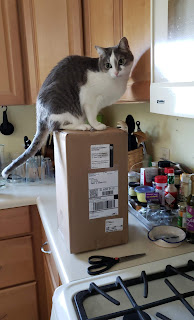 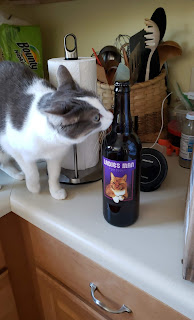 My daughter sent me wine & hard cider from her favorite winery to get me through this kidney ordeal with her father. Polly loves looking down on mere humans so immediately took to her throne in the sky. She was was also smitten by Warren, the winery's cat model. Ha!

So how am I doing in April with my Projects Half Done? Here's my April list with progress noted.

So that's how things stand here. What are my goals for the end of the month? Probably not too difficult to figure out.
Catch you on the first of May. Let's see how I do!

I'm joining the Linky Party with Quilting Gail and the others for the PHD Mid-Month Party!
Posted by Susie H at 4:43 PM 7 comments:

FNwF & RSC and a Renal Urinoma? What?

So wonderful to be able to connect with my virtual friends two weeks in a row. Cheryll has graciously hosted Friday Night with Friends on the first Friday of April and added in the second Friday as well. Here's the link to check in on what my world-wide friends have achieved.


I'm also linking up with Angela at So Scrappy.  Rainbow Scrap Challenge's color of the month is light & bright blue. We are all trying to use up our scraps and yet there is always plenty to sew with. Just how exactly is that possible??? Hahaha! Anyway you will be amazed at some of these projects as well. Unfortunately I have no scrappyiness of blue to share this week. But please feel free to see what the others have been up to!

So what have I been sewing? This week I completed a couple of Afternoon Delight blocks. I've stayed busy with the applique blocks and a few more modified shoo-fly blocks.

Sometime last week I also managed to finish the last block of String-X. This was my project from RSC 2019. I wanted my quilt larger than the pattern given so I had to do a couple extra blocks. After October's Brown block, I added a mostly black block and this week I completed the mostly white block. Now I have 12 and can put this thing together! 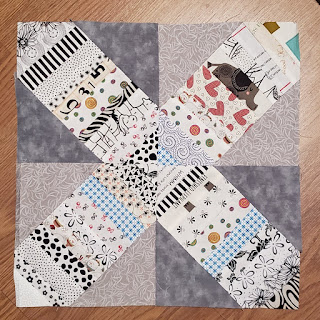 Last night during Friday Night with Friends, I started Block #14. No picture yet. I also finished up a pair of socks. The pattern is Margaritaville and can be found on Ravelry here and is a freebie from Adrienne Fong. One sock is currently blocking and the other will be later this weekend. The picture shows the pair unblocked at this point. 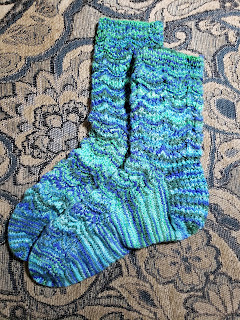 Pretty wild, huh? They're nice and fluffy and will be perfect with jeans next winter ... or maybe next week as we're going to be on the low side of Spring with highs in the 40s, lows flirting with freezing!

A quick(?) update on my dear husband. He had his follow-up appointment Monday and told the doctor he was in a lot of pain and felt bloated still. There was also an elusive fever every so often but it was low-grade and I complained about how breathless he seemed. The doctor took bloodwork and Xrays and called the next day saying the bloodwork seemed fine and the Xrays showed his lung was still partially collapsed but was still an improvement from when he was discharged. It should still be OK. However it bothered the doc that he was still in so much pain and so he ordered a CT scan for Thursday to see if it showed anything to warrant such discomfort.

Thursday we reported for the CT, which was done, but at the conclusion we were told to go immediately up to see the doctor. Turns out he's got a HUGE urinoma! So large that it was pushing his liver up into his lung. My next stop was the hospital for re-admittance! Yesterday they drained the renal urinoma and he has a drain in place which may be there 6-7 weeks. There was signs of infection but was it the cause of the urinoma or a result? I do not know but will definitely be asking when speaking next with the doctor. When I spoke with DH last night, he sounded better but is extremely tired. After all, he hasn't slept a good night's sleep in three weeks now. Anyway, we're hoping to have him home Monday.

And that my friends sums up my week. Trip to the doctor (40 minutes one way) on Monday, trip to the doctor on Thursday followed by a stop at the hospital, and a trip back to the hospital yesterday to drop off toiletries at the front door because no visitors are allowed.

If you're still with me, here's a picture of my little Brody. I love the angle of this picture. He looks like Baby Sasquatch. Just look at those feet! 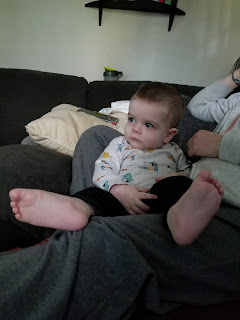 Have a good weekend and Happy Easter!
Posted by Susie H at 6:46 AM 14 comments:

I must say I had a very nice evening last night stitching with my virtual friends. There were 17 (!) of us at Friday Night with Friends! You should visit and see the really cool stuff going on with us thanks to Cheryll getting us all together. So  now you're probably wondering what I did. I worked on Afternoon Delight applique blocks.


Not a lot of progress made on RSC. On Wednesday Angela selected light & bright blue for April's color. Thursday evening found me digging through my Blue Bin and cutting fabric to get ready.


So no sewing for RSC yet but I'm armed & dangerous! Lol! I'm willing to bet that there were others busy with their light blue scraps. Linking up shortly with Angela at So Scrappy to see how productive the others were.

OK, what else has kept my attention? Hospital Sketches is under the needle for quilting!!! 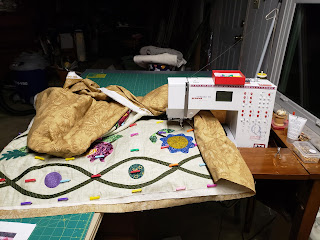 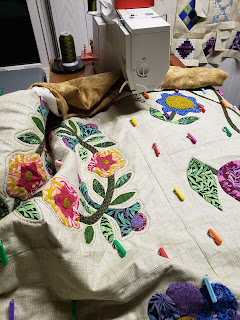 Until next time, have a great & safe weekend. Now go wash your hands and face! 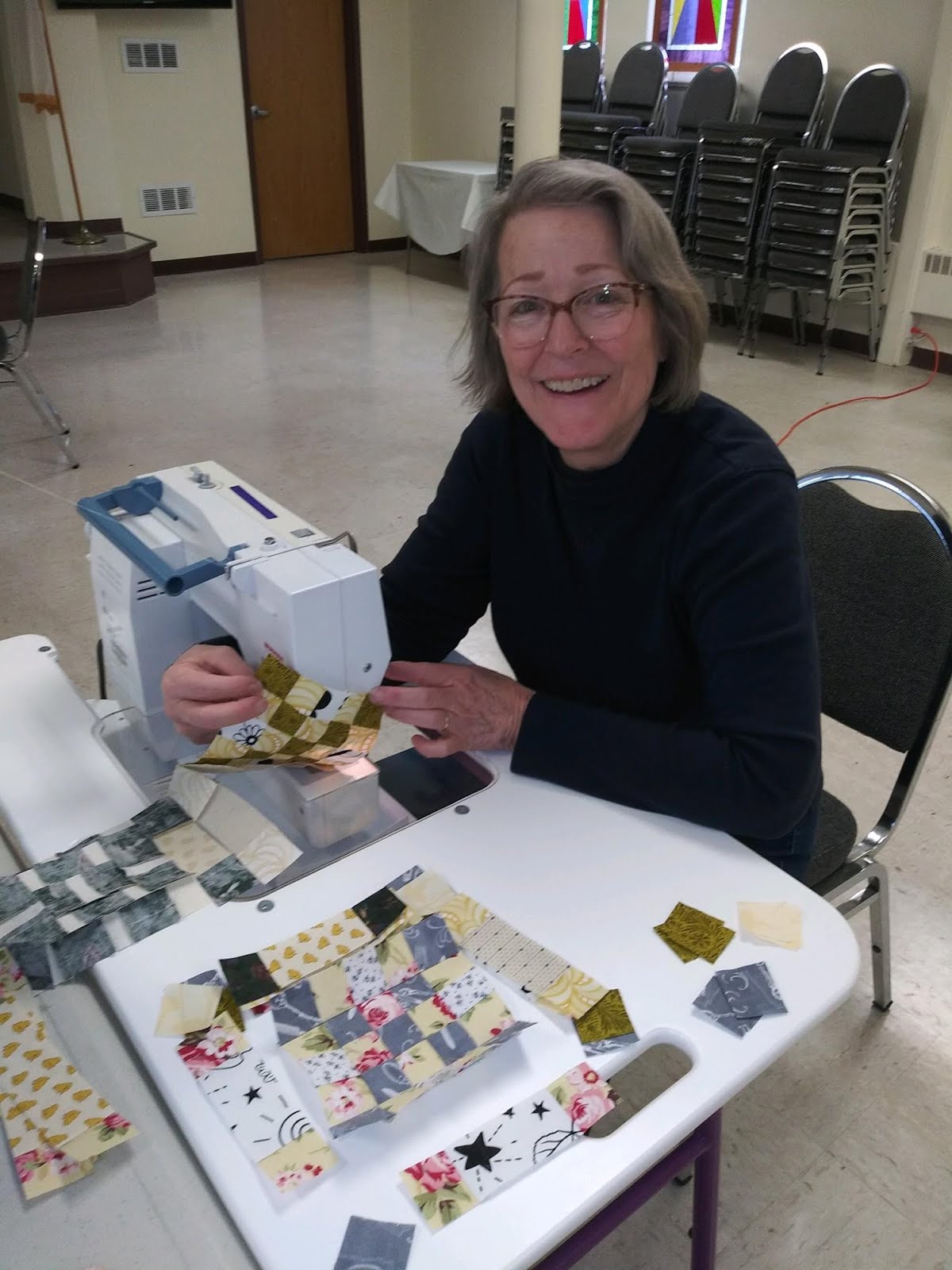 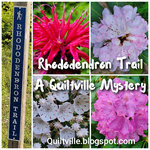 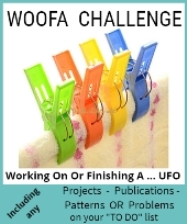 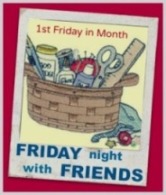